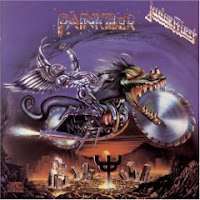 Though they had already delivered numerous masterworks in British Steel, Screaming for Vengeance and Defenders of the Faith, it is Painkiller which stands the test of time as both the de facto Judas Priest experience and their heaviest effort to date. Which begs the question, why in the Nine Hells did they not continue in this direction? I realize they had the falling out, and the 'Ripper' Owens period (my head still aches), but even the two reunion albums so far have been garbage by comparison.

Painkiller was like the culmination of an architectural masterpiece: the foundation had been laid, brick by brick, carefully for years; the riffs a geometry of melodic aggression; each of Halford's vocal lines delirious with ham-fisted metal imagery and stark passion. The title track EXPLODES, the heaviest fucking anthem this band has ever manifested. Halford soars forth like an escaped asylum inmate who wants to end your pain AND YOUR LIFE. Who cares that the song is about some figurative alien metalloid angel of salvation (Jesus with a flying motorcycle and double chainsaw action). That's just bonus.

Ride on! Right on! It doesn't hurt that the rest of the album is equally solid support for this blazing avatar. "Hell Patrol" is a melodic anthem which celebrates the machinery of final judgement. "All Guns Blazing" is just...well, let's just say when I saw the band on their Painkiller world tour back in the day, Rob Halford dedicated it to Saddam Hussein. :D

"Leather Rebel" opens with a whirlwind of melodic speed picking before glorious verse and chorus, a sweet and pure tribute to the tr00 metal elite. "Metal Meltdown" ranges from shredding to thrashing, with it's ominous and silly chorus. Fuck, just how many songs on this album have the word 'lazer' in them? Okay, only two, but that's two more lazer references than YOUR favorite metal album! En garde! "Night Crawler" is a creepy horror anthem and yet another hybrid of power and thrash metal with poppy melodic riffing similar to "Painkiller". "Between the Hammer & the Anvil" starts with some slower, doomy chords which are revisited later in the track with an actually beating of such solid objects together. "A Touch of Evil" is a seductive tune with silly synthesizers, it's similar to the stuff Ozzy was doing at this period, and a little Zeppelin influence. I love it, especially that chorus:

Touch me, Rob! Oh, touch me! Too much information. The majestic instrumental "Battle Hymn" sets up the album's final number "One Shot at Glory", which is pure Priest and again features that amazing, unforgettable chorus.

Glen Tipton and K.K. Downing once again proved their worth as the genre's pre-eminent straightforward axe duo. Tasteful leads when required, but never over-wanking or attempting to upstage the vocal and verse. Ian Hill has never been an amazing bass player, and here he just continues to follow along with the guitars. Scott Travis delivers a pretty stellar drum performance, especially the memorable fills which open the title track. The lyrics are hokey but loveable throughout; they function perfectly with the pseudo-metallian concept. The album has been remastered but the original still sounds fantastic.

To describe the influence of this band (and album) is beyond the parameters of a mere mortal's humble review, but I can assure you, it's worth the hype. You didn't need me to remind you, of course, because you already have and love this. Or so the voices told me. Now I just need to forget about what the slew of atrocities the band issued post-Painkiller, so I can sleep.

I have trouble listening to this album. So many of the songs tend to get stuck in my head, then I can't sleep. :P