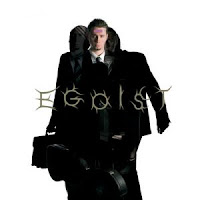 Egoist is the solo project of Stanislaw Wolonciej, drummer for fellow Polish progsters NewBreed and death metal band Angerpath. Whereas those bands manage some semblance of familiarity in their style and structure, Stanislaw handles all instruments and throws all pre-defined notions out the window for his solo work. The debut Dead Egg raised a few eyebrows when it was released, but Ultra Selfish Revolution goes even further into the realm of the bizarre with its complex fusion of math & groove metal, funk, melancholy multi-layered vocals, and...well, whatever other spare parts were lying around. This is the audio equivalent to building a go-cart out of the random detritus in your garage and basement.

At its worst, this approach could become jarring and annoying. Fortunately, Wolonciej delivers a captivating work which is often times HYPNOTIC in its unusual, unexplored atmospheres. "The Rest Will Follow" is a fitting pun for an opening track, but not one of the best. Imagine if Korn decided to go fusion rock after tripping on a lot of doses. "Lifeless Love" fares much better with its cruising fundamental rock riff smothered in spacey guitar funk, almost conversational lyrics and a bridge which alternates from a total freak out to some catchy chorus-like vocals. "On" is mired in a slower paced groove/funk, each chord accented by slight noises and glitch, and the voice has some interested layers to it. "Just Ones" borders on Mike Patton's spastic vocal experimentation, in fact Mr. Bungle is one of the only other bands you could compare this to. Strange and random yet successful. Other surprises on the album include the catchy indie rock groove of "Near Warm Fireplace" and the jumpy prog epic "Bright Shift".

Ultra Selfish Revolution sound fantastic, this guy is truly a talent when it comes to dragging out the sounds he wants from each of the disparate elements in the sound. The bass and guitar sound suitably funky, the vocals distinct and unique, and the ambient/noise tones delivered at just the proper level. This is a far more ambitious project than any of his other bands, and it should definitely turn the heads of any metal/rock fan seeking out something truly unique. It's not perfect and many of the songs lack memorable qualities. However, I prefer this album to his previous Dead Egg and certainly recommend it to any fan of avant-garde metal like Ephel Duath, Mr. Bungle, Headcontrolsystem, or even Fredrik Thorendahl's Special Defects project.