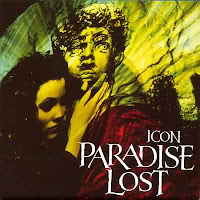 Icon marked the 4th full-length foray for the British gothic doom pioneers, and rather a perfection of form. While the previous Shades of God was a mediocre attempt at bridging the band's death/doom roots to a more accessible use of melody, this album truly delivered the experience and surpassed even their widely regarded classic Gothic in terms of memorable songwriting.

Notable here are the superb, sad guitar melodies which drone across each of the 13 tracks, as well as Nick Holmes' decision to abandon the guttural growling fully in favor of Hetfield tinged clean vocals and the occasional deep goth croon. Together these elements created an album of intense sorrow and emotional power, one of my favorite releases in the doom genre yet today. The perfect rainy day affair.

"Embers Fire" starts with some soft synth tones before the slow groove of its downtrodden yet mighty guitar hooks erupts. "Remembrance" picks up the pace ever slightly with its groove and four-chord verse brooding beneath echoing guitars. This is one of the more 'rock out' parts of the album. The opening riff to "Forging Sympathy" also rocks out until it is eclipsed by the unbelievably sad and mesmerizing verse riff.

A mass of breathing souls
For times are desolate
Passing judgement on my sentence
As I perceive my dying day
Gime me a promise.
The word I will never hear
Sympathies forging, stalling in me

From here the album truly begins to harness its somber strength. "Joys of the Emptiness" is severe doom for a dreary day, it's acoustic bridge evoking emotional discourse from void of despair. "Dying Freedom" once again makes use of a light synth intro before the incredible melodies of Aedy and Mackintosh and a killer chugging hook. "Widow" drives along, a well-paced percussion march, buried beneath the environment of its deep, weeping sky. "Colossal Rains" is another stunner, in particular the ways the vocal samples echo behind the verse, and then the perfectly placed 'breakdown' chug with its creepy guitar melody. "Weeping Words" and "Poison" both rock, the latter being one of my favorite tunes here, written in a style the band would repeat numerous times over their next albums Draconian Times and One Second (both also good, but not THIS good). "True Belief" is an epic tune with a beautiful guitar melody beneath Holme's newfound rasp. "Shallow Seasons" is once again powerful, and "Christendom" features some tasteful female vocals amidst its glorious melodies and barrage of chords, recalling a little of the Gothic vibe. "Deus Misereatur" is a fitting end to a perfect album, an instrumental with lush, gorgeous and sad synthesizers amidst a thumping bass, flowering into piano doom.

The lyrics, though obvious, are pretty solid on this release. The production sounds fresh to my ears even today, not only for the crunch of its guitars and steady stream of melody but for its ability to immortally capture the emotional drag of the compositions. Gothic doom simply does not get better than this album. It sounds sincere rather than the emotional blathering of some wrist cutting reject. The weight of the atmosphere is crushing, yet it knows exactly when to rock. Though Paradise Lost have gifted us with many wonderful and miserable albums over the years, from the groundbreaking Gothic to the accessible excellence of Symbol of Life, I still consider this to be their masterpiece, a flawless expression of this medium.