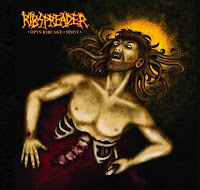 We all know by now not to judge a book by its cover, and in the case of the 3rd Ribspreader full-length, you should try to ignore the horrendous artwork. Perhaps they were lax in getting this out, or perhaps it is some failed attempt at minimalism, but it's an eyesore best avoided.

The album itself doesn't fare so poorly, as it's another of Rogga's loving tributes to the old school Swedish death tone. Simple concepts and simple riffs fuel an even further stripped down approach than the band's previous efforts. After a tasteful and catchy acoustic intro, the carnal crunch of "Dying dead decomposed" grinds your entrails. "Corpse Dumpster" has some groove and slam to it but most importantly I enjoyed how the creepy open picking of the chorus, which sent me back in time to what I used to love about this genre. Pure menace. Other great tracks include the grooving "Septic Severance", the catchy, haunting melodies which kick off "Dead and Beyond". The doom of "The Skeletal Empire" parts way for some face rocking tone. In fact, most of the songs here are good with the exception of the Ramones cover.

Where does it place next to their earlier albums? I'd say that it took a few spins to grow on me, but I now enjoy it as much as Congregating the Sick. It's a little dirtier but the repulsive tones and guttural simplicity have a raw appeal which isn't always present in these retro death metal releases. Just get that cover art out of my face.