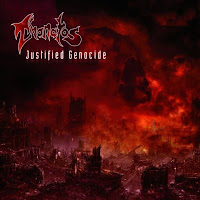 Holland's Thanatos are true veterans of the European metal scene, with a career now spanning well over two decades, despite never landing a large following. Justified Genocide is their 5th full-length album in all those years, but it offers a worthy dose of chunky and excitable thrashing death metal; ample evidence that the band has not lost its drive along the way. That said, this new album isn't about to shatter any boundaries or earn the band a heap of new fans; it's just business as usual. Fans of fellow Dutch death/thrash band Legion of the Damned (formerly Occult) will find a lot to appreciate with this band's similar, simple approach.

Rooted in the traditional German thrash metal, early Florida death metal and a heavy dose of Slaytanic influence, the Dutchmen bludgeon their way across 11 tracks. "They Feed on Fear" starts off as a simplistic pit anthem before picking up into a more sporadic and exciting thrash riff. "Destruction. Chaos. Creation." slogs forth at a slow, precise pace, it feels almost as if a lumbering titan is draggings its enormous arms along behind as it lays waste to a city. Other choice tracks include the moody "Apostles of Damnation" (with a slow brutality to it reminiscent of Morbid Angel's album Domination), and the blazing speed of "The Netherworld". The CD also includes two tracks from a 7" a few years back, including a decent cover of Dark Angel's classic "The Burning of Sodom" which I daresay might sound better than the original. Not all of the sounds are very good, however, there are a handful which felt more like filler while I was waiting for something exciting to happen.

The sound of the album is raw and crunchy, but it really gives the album a fist to the face appeal which should please death and thrash purists who want a no-nonsense, brutal delivery rather than something which sounds like it was recorded in a billion measure for measure takes. This band could probably plug in at the local concert hall and deliver this sound right through the speakers. The lyrics follow the expected themes of social unrest, religion and the occult. There isn't a large fanbase for a band like this, they write in an old school style without a lot of the technicality that many younger death metal fans desire. But in this case it's unecessary, as this album was written for thrashers who want a brutal edge to the form. If that niche includes you, then Thanatos does deliver.