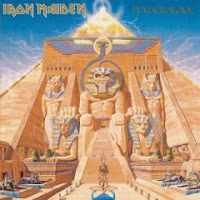 From the release of The Number of the Beast in 1982 to the career defining masterpiece Somewhere in Time four years later, Iron Maiden could simply not be stopped. The four studio albums of this period and the excellent Live After Death represent one of the strongest, if not THE strongest runs ever from a metal band, and Powerslave fits into this with a grandeur of lyrical legerdemain and unforgettable songcraft. Who could forget the iconic Derek Riggs artwork gracing this cover? As timeless as its source.

Like any proper Maiden album, this one is best defined by its unerring melodies, powerful vocal performance and lyrical adherence to history, mythology and fiction. Half of the tracks here can be counted among their hits, staples of many a setlist across the past few decades. "Aces High" is one such staple, an energetic and fist banging tribute to the aerial dogfight. "2 Minutes to Midnight", yet another classic burns with a pure NWOBHM fire: bluesy riffing which can break out the spikes and leather in all of us. The vocals in the bridge and chorus are immortal. "Losfer Words (Big 'Orra)" is an instrumental pun with some excellent winding guitar leads over Steve Harris' extravagant bass, while one of the lesser known tunes from this disc it's actually got some of the best riffing in all Maiden. "Flash of the Blade" is another killer which stems from Dickinson's love of fencing, a celebration of swordplay throughout the ages. "The Duellists" takes this theme a little further with a toss of the gauntlet, and an anthemic chorus line which I number among their all time classics. "Back in the Village" is a nice post-war anthem with a catchy, noodling guitar lead in the chorus.

As memorable as all of these songs are, we haven't yet arrived at the 'epic' portion of the album, comprised of its final two tracks (at least on the original release). "Powerslave" is unbelievably awesome, Dickinson's vocals taunt and beckon the listener back to this mystical empire of old. No offense to Nile or any other band which thoroughly explores Ancient Egypt thematically (and more accurately), but this remains the most effective Egyptian themed metal song ever to this day, despite having only a few riffs which directly mirror the cultural vibe. It's all in the delivery.

Fuck!!! This was 1984 people, do you know the effect this stuff had on a young and deviant mind addled and fueled by Dungeons & Dragons and science fiction novels? It's not over yet, because Maiden pays a special tribute to Samuel Taylor Coleridge with the 13+ minute epic "Rime of the Ancient Mariner", with its memorable and creepy mid section slathered in bass, samples and ringing guitar ambience, one of the most brilliant passages ever committed to tape by this band.

Though the album has been remastered, the original mix still sounds fantastic. Some decent bonus tracks have been added with the 1995 version, in particular "King of Twilight" is worthy of being here. The musicianship is all-around excellent, from Nico's well balanced drumming to the Harris bass wizardry, dual guitar melodies and Dickinson's masterful delivery. Compare this to almost any album of its year...with the exception of maybe Ride the Lightning it was unsurpassed, from both a technical and nostalgic standpoint. It goes without saying that this belongs in any true metal fan's collection, but in the rare case some reader has been living under a rock or kidnapped by merfolk all these years...actually, fuck it. Even the merfolk listen to Iron Maiden. So you have no excuse.