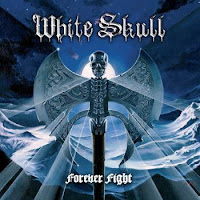 White Skull is a band who have steadily improved since their roots. I found some of their early albums like Tales from the North to be quite bad, but the band had been writing better material after they replaced their original female vocalist with Gus Gabarrò. For their 8th full-length, Forever Fight they have parted with Gabarrò and replaced him with a new frontwoman in Elisa de Palma. While I'm not a big fan of the new vocals, she's at least a serious power metal singer and the band does not revert to the pompous and operatic fairy metal format. Elisa's got a nasally voice reminiscent of much German power metal (which means she fits in with White Skull quite nicely) like Gamma Ray or Mania.

Unfortunately I just couldn't get into the tracks here. They are performed well, with diverse tempos and a crisp and clear mix, but few feature the memorable riffing and chorus prominent in all the best power metal. The band tends to move at a medium pace which rarely gathers much force as it rolls down the mountain, when they pick up the speed the riffs tend to be glossed over in keyboards, which detract from the thrusting power of the guitars. The better songs here are those such as "Spy" where the guitars are really surrouning Elisa's vocals, but even this gets slathered in organ sounds. Some of the gang vocals are also pretty weak, for example in "Heavy Metal Ares" the backups just sound as if they'd been phoned in.

The band isn't just your average Rhapsody or Helloween clone, they sort of weave between these anthemic styles. Elisa's accent is a little thick and it does make some of the vocals feel sloppy, but those of you into the underground Italian power metal have since grown use to this. I can't give Forever Fight a huge recommendation: it's superior to their early work, but the band has it within them to create better albums than this (i.e. The Ring of the Ancients or the XIII Skull). Fans of female-fronted power metal might want to give it a spin.