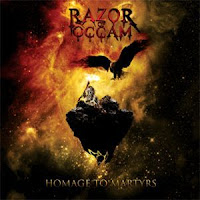 Razor of Occam is a vicious black/thrash hybrid featuring members of Deströyer 666 and Macabre Omen. Though the project has been around for some time, Metal Blade Records has done right by snagging the band for its debut full-length (and to balance their ever expanding roster of trendy American melodeath/metalcore). Homage to Martyrs is a violent and ballsy introduction to the style of thrash and black metal pioneered by bands like Impaled Nazarene, Maze of Torment and Bewitched. The Australians approach this with an unswerving brutality, as if their songs were a wall of pure force.

"Altar of Corruption" flows like tank treads through the rank and file of infant flesh. Punishing double bass anchors a barrage of cohesive riffs. "Bite the Dogmata" seems a direct continuation in terms of pace, but the repetetive riffing creates a mesmerizing effect. "Day of Wrath" starts with a killer series of venomous guitars accented with horrifying and subtle leadwork. "Heat of Battle" creates a maelstrom of high velocity razor winds and shrill leads that will begin feasting on your bones once your flesh has been stripped. Other worthy tributes to blasphemy include the catchy and circular rhythms of "Pattern on the Stone" and the violent wrenching metal assault called "Flame Bearers".

This album will appeal to just about any fan of black or black/thrash metal, in particular those bands I listed above, certainly Deströyer 666. The production is perfect, guitars sharp as knives and an intense drum performance from Peter Hunt (formerly of UK bands Marshall Law and Dragonforce.) Vocals offers with a perfect sneer and the bass audible and punishing.
Quite a find for Metal Blade and quite an effort for a project which had yet to see its day.

Metal Blade Webpage
Posted by autothrall at 9:17 AM