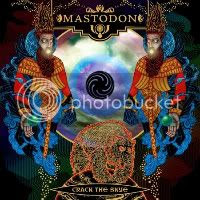 You know those albums that come out that will do nothing more than cement the already fanatic fanbase of a band, but not turn newcomers on to their particular brand of music?

Yeah, well guess what, brother: Crack the Skye ain't one of them motherfuckers.

Let's just get it out of the way now: Crack the Skye is not as heavy as Remission. It's not even as heavy as Blood Mountain or Leviathan. If this twists your stomach as an automatic turn-off, then dasvidaniya. There's nothing more here that you need to read.

For the rest of you who stuck around after this revelation, well, let me just be blunt: Crack the Skye is easily Mastodon's most cohesive album to date... and if you can take some melody and classic rock with your angular sludge prog riffage, well then welcome to Nirvana, Heaven, the Elysian Fields, or Scarlett Johanssons bicycle seat (Your preference). This album is a corker from it's auspicious opener “Oblivion” to the multi-part finale “The Last Baron”, leaving you nodding your head the whole way through.

On your first spin you'll notice a few changes to Mastodon, and the first and foremost change will be Brent Hinds much-improved vocal performance. No, his voice isn't great, sometimes going from a younger, more tuneful Ozzy to an impression of Phil Collins yelling at a fence in the middle of a PCP rage. After a few spins, you're going to notice the biggest (and most important change) of the Mastodon sound: Catchy, solid, and extremely memorable songwriting. Gone are the meandering sections of The Mars Volta-lite indie bullshit that were only cool the first time. All of the songs, in every part of the album, are placed upon a concrete bed of musicality that never waivers. The fact that they've cut the amount of tracks to half of what was found on their previous releases and focused on only seven compositions shows, and in a big way. Each song has a unique sonic fingerprint, a unique feel, but the album itself feels like a complete thematic singularity.

What all that means is that when one of these songs gets stuck in your head, its consistency is peanut butter. It doesn't mean the music is radio-friendly (any more than their previous stuff was), but it's listener friendly. You want to greedily soak up these delicious tracks like the most ripe cantaloupe, instead of choking down a bunch of shit to find a couple peanuts that weren't digested.

Get this album now.

Sweet first review, mate. I was glad to see that you joined up with our group, as I had noticed your Gojira av and had planned to address you at some point or other.