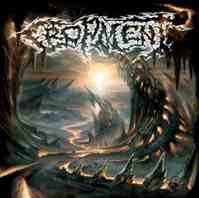 Cropment is a death metal outfit from Switzerland, ever brutal but not entirely technical or complex. They utilize a lot of chugging breakdowns on this second album which remind me of of US bands like Dying Fetus or Skinless. The vocals range from mid-ranged hostile grunting to a lower vomited style, and often these alternate at a rapid pace, creating a furious chaos.

The band does have some occasional old school edge to their tunes, reminiscent of early to mid 90s material, and this is the point at which their riffs usually shine. I found a few of the songs pretty dull like the shifty pit anthem "Insidious Insanity", but then others picked up the pace and offered some better riffs; tracks like "Bobby Loser" and "Manifestation of Deepest Horrible Dreams". Yet even these have a few of the utter chugging breakdowns with guitar squeals that lack a catchy note selection (an example is "Pinned and Skinned"). The album ends with one of its strongest tracks in "Depressive Deeds", a whirlwind of shifting breakdowns and pummeling destruction.

Dead Soil is not a bad album, it has a few moments of polish which bely hints of a greater band. Though it's unlikely something I will want to revisit, fans of stomping death metal honed for the mosh parlour (Skinless, Devourment, etc) might like to check this out.