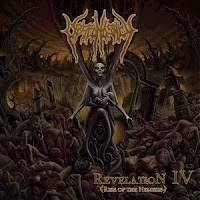 Despondency are one of the foremost German bands when it comes to an emulation of the extremely guttural, slamming brutality birthed out of the USDM and then tempered all about Europe and the civilized world. Bands like Deeds of Flesh, Internal Bleeding, Suffocation and Cannibal Corpse all come to mind, as well as their countless progeny. While Revelation IV does not aspire to much beyond this, what I can say is they've created one of the best sounding albums of this extreme death metal subset.

What you get here is much like any other album of its style. Chugging groove riffs alternated with the occasional blasting and guitar squeals. The vocals of Konstantin flow across two planes: guttural and then extremely guttural. The album is extremely mosh-tastic only I find it difficult to imagine the pit full of freaks who could keep up with it. It's exhausting and unrelenting in its brutal endeavor. This band does not use much in the way of melody, aside from the occasional series of chords and harmonies that counteract the chugging, the guitars are used almost exclusively as percussion. Occasionally it works damn well, I could not resist the call to start splintering my neck to "Steps to Supremacy" or "Screams of the Forsaken". Perhaps the most interesting track is "Silent Extinction" with its creepy atmosphere and wonderfully plucking acoustics, evolving into a simpler chug and slug fest than many of its peers on this album.

The album's true strength lies in its mix. The instruments are balanced extremely well, you an hear the subaudio sewer groove of the base below its percussive bludgeoning guitar riffs, and the drums offer an ever-busied exercise in double bass and blasting which perfectly suits the songs. The vocals are far from unique but their placement is chosen well. When it comes down to the wire, Revelation IV isn't much different than hundreds of other albums of its type, but the band's commitment to great production and unapologetic groove upon groove have won me over in the end.