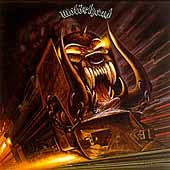 In a year which produced such albums as Master of Puppets and Reign of Blood which were carrying metal music into its bold and aggressive future, the 7th studio album from legends Motörhead served as a beloved contrast, a study in the rock and roll fury of the medium's past. From its iconic hellish train cover image, Barbarella inspired title to the steady distorted thrum of Lemmy's bass, it's yet another of the band's myriad classics.

"Deaf Forever" makes for a nice lead-in with its steady rocking rhythm, dominating bass and shouting samples. The lyrics are also pretty serious business here as evident in the chorus:

"Nothing Up My Sleeve" follows the "Ace of Spades" format of fast and fun, shuffling blues metal with big chords below Lemmy's blue collar poetics. "Ain't My Crime" rocks the hell out, with a noisy guitar strumming above its chords. "Claw" is lowdown, dirty and mean and sexy. He just don't understand the power of the claw! "Mean Machine" is perfect Motörhead, raw and powerful metal blues performed like no other band. One of the best tracks on the album. "Built for Speed" is a mid-paced tribute to the rock and roll lifestyle. "Ridin' With the Driver" delivers a punk edge and "Doctor Rock" is a corny classic:

I've got the medicine you need
I've got the power, I've got the speed
I'll find out how to stop your clock
We sure ain't talking Doctor Spock
Hear me talking, Doctor Rock

This is the same song in which Lemmy tells some lucky female inspiration she's got a body like a Marshall Stack. Grrowwrr! The title track "Orgasmatron" ends the album with its very simple rhythm and some of Lemmy's most gnarled and brutal vocals ever, despite the lack of many notes in the riffs it's almost hypnotic and another of the band's classics.

The entire album is slathered in a rotten, dirty production. You feel like you've just strolled into a bar in HELL and Motörhead is the house band. Expect some fightin' and at least one bottle broken over your head. Also expect not to be my friend if you don't like this, poseur!

Posted by autothrall at 8:57 AM