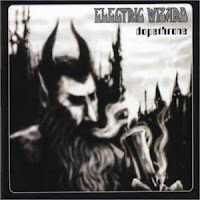 With stoner doom it is often the case that bands without any real doom elements get lumped into the genre, intentionally or not, but Electric Wizard put on a veritable clinic with Dopethrone of how to infuse the essence of a certain controlled substance, lyrically and musically, with the ability to make you feel truly doomed. In 2000, they unleashed this one hour juggernaut of a bad trip upon our miserable, insignificant little world. It stands as a cornerstone of its genre, a putrescent slab of true aural darkness, capable of stripping away your outer, sociable psyche and baring your interior to this drug-altered nightmare.

Let me put the sound in words the only way I know how: this album is heavy as fuck. From the onset you are submerged in noxious sonic sludge, unable to hear yourself think. Unable to breathe. Track one, "Vinum Sabbathi," holds you under. Jus Oborn's fitting half-scream vocals herald your journey into Dopethrone:

Extracted essence of the stone
Narcotic of the faceless ones
I awake on planet black
Freezing moon, no turning back

Track two lulls you and draws you in on thin wisps of smoke with a smooth little groove before you are taken to "Funeralopolis." Oborn describes a mausoleum planet inhabited by zombies, once sacrifices to the glory of one. Slow, super-heavy Sabbathian rhythms groove and groove and groove. Gradually the music increases its pace until the frantic finish:

Nuclear warheads ready to strike
This world is so fucked, let's end it tonight

"Weird Tales: i Electric Frod ii Golgotha iii Altar of Melektaus" is a fifteen minute exploration riddled with all things Lovecraft, capped off with a lengthy jam session with some synth worked in that sounds not unlike NASA's Voyager recordings. The following fourth song "Barbarian" continues the Weird Tales theme, a tribute to, you guessed it, Conan the Barbarian.

After the sonic miasma of "I, the Witchfinder," we are treated to a curious, nearly upbeat bluesy interlude in "The Hills Have Eyes." That punishing heaviness returns in "We Hate You," drums prominent, the rest of the band buried by crashing percussion. Last but not least, the title track. First, a short, simple, and yet awesome sample. Then, sludge. So incredibly heavy. Oborn chants around a sinister, catchy hook. One of the album's few guitar solos appears. Also appearing, one of my favorite lyrical stanzas:

Dopethrone unquestionably played a part in the development of my musical palate, and if you have not heard it, by all means, seek it out. Just be careful. It is a crushing and merciless bad trip unlike any other.

http://www.myspace.com/electricwizarddorsetdoom
Posted by JD at 1:44 AM

Just thinking about this album makes me cringe and sweat. I am incapable of listening to it without the proper psychological preparations, which include abandoning all hope and a LOT of absinthe.