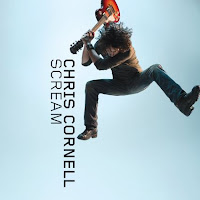 Hearing the golden throat of the Evergreen State try his dice in the hip-hop/R&B market seems like an absolute disaster on paper, and in fact it's quite near a disaster in its execution. Chris Cornell is one of the most distinct American male vocalists we have. His legacy with Soundgarden was spotless, and though Audioslave and his first solo album were mediocre at best, it wasn't for the lack of a good voice. Carry On, however, was quite good, a more accessible take on his final years in Soundgarden. I also loved his Bond theme "You Know My Name".

So what we have here was originally a remix project, a team-up between Cornell and R&B/pop mogul Timbaland, that took on its own life and turned into a slew of new originals. Timbaland's influence here is obvious, you could have just as easily used Ginuwine or Justin Timberlake's vocals over some of these tracks and not had much of a difference. Some of the tracks just flat out suck. I mean who wants to hear Chris Cornell, who once fronted brilliant albums like Ultramega OK and Louder than Love, chanting:

Who exactly thought this would be a good idea? Is Cornell desperate? This holds true for a number of the tracks on Scream, but here's the kicker...which I admit with great trepidation. There are a few moments where this team-up actually *clicks*. "Take Me Alive" has a nice Middle Eastern spin to it despite it's layman hip hop beats which any 3 year old could program in 5 minutes, driven home by Cornell's scintillating mid register vocals and a chorus which ALMOST recalls the rock. "Long Gone" is an extremely fetching love song despite the Beverly Hills 90210/Melrose Place emo guitar line which breaks forth in its chorus. This latter is the best song on the album and hopefully its used as a single. "Climbing Up the Walls" is also pretty nice, a moody atmospheric. "Never Far Away" is like a Kelly Clarkson song but with Cornell. It works.

The album is true Timbaland, I do like his use of very 80s pop synths amidst the more modern and robust beats. Say what you want about the host of shitty, trendy artists he has produced, but the guy has an ear for sounds that stick with you. The biggest distraction is all the chorus and R&B effects used on Cornell's voice, often these fail. You cannot contain this man's vocals with studio wizardry. He's got one of the most glorious throats in the goddamned world. Badmotorfinger, anyone? Yeah. It doesn't belong over a cheap throwaway get up! jump up! pop track like...err..."Get Up".

In the end, Scream doesn't entirely suck, it's an interesting collaboration. But I truly hope the man returns to form at some point, as he seems to be entertaining an ever downwards spiral of bankrupt ideas. I just feel I have to point out the obvious.