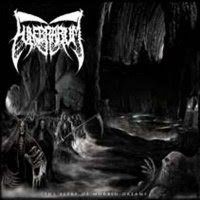 Cyclone Empire seems to be headed in the right direction as they snap up tasteful old school death metal acts and issue records like this sophomore full-length from New Jersey's Funebrarum. If you fancied their split with Sweden's Interment a few years ago you'll know what to expect here: brutal old school 90s death metal with both Swedish and Floridian influence. Gnarled compositions of utter darkness and conquering grooves, aimless and seizure-inducing lead work, and vocals that can unearth those long committed to the earth for a corpse incursion into the world of the fickle living. You'd expect members of Evoken and Abazagorath to know their shit: you would be correct.

The Sleep of Morbid Dreams is a monolith of pure brutality, real fucking death metal. "Perish Beneath" opens with a creepy horror sample before unhinging destructive Bolt Thrower style rhythms under a decrepit winding melody. The track picks up as Daryl Kahan's low register pulverized the living flesh into a mash of writhing maggots and guts. "Grave Reaper" is like Incantation meets early Entombed meets more Bolt Thrower, repulsive grooves which can wither your speakers. At this point the album is already superior to its predecessor Beneath the Columns of Abandoned Gods, but there are still five tracks to go, led off by "Beyond Recognition", a festive and pummelling grind machine. "Cursed Eternity" goes for the mystique through some atmospheric chords and melodies, though the song is still sentenced to shred flesh with some bombastic faster rhythms. "Incineration of Mortal Flesh" lunges forward at a lopsided groove, like a bulldozer through a graveyard, unaware of what it just stirred up. "Nex Monumentum" offers some brief acoustics and somber collapsing melodies before transforming into what might be the best song on the album. The closer "Among the Exiled" creates atmosphere with dark ambience before corroding all arteries with its aural warfare grooves.

I have to admit I was truly impressed here. This is assured to darken all skies to gray if not the blackest of nights. The album captures and maintains the grim aesthetics of earlier death metal, where brutality was delivered through simple punishment and a sincere, squirming hatred. This should appease any fan of the retro wave of death metal, and it's combination of influences and crushing production should score them some recognition beyond that niche. One of the best new US bands I've heard lately in the vein of roots death metal which is proud to wear the name, far superior to the noodly spastic tech shit so many bands are phoning in to impress their girlfriends and combat their attention defecit disorders.

Only death is real.