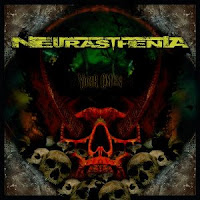 Neurasthenia is an Italian band well versed in their classic thrash metal; Your Omen is a decent sophomore full-length, one that may appeal to fans of the old school European thrash sound of bands like Deathrow, Paradox, Midas Touch, Vendetta, and so forth. Now, their style isn't quite as complex as a Deathrow in their prime, but the band has an excellent aesthetic for dual riffing and a great tone to the album which reminds me a little of Paradox' Heresy. You'll also hear some of the Bay Area forebears like Metallica or maybe Hexx here.

Vocalist Claudio Loprieno has a meatier mid range, quite dirty sounding and with the hint of his native accent. In other words, genuine European thrash metal. He (and the backing vocals) often merges these with some death snarls or grunts, but they're not quite as effective. After a subtle acoustic intro, the title track blazes through with some great riffs, the immediate strength of this band is the ability to pattern rhythms and leads together into a flawless marriage. "Go Fuck Themselves" maintains the energy before "Church of Tomorrow" dials it back for a good mid paced thrasher with some more good riffs. Other good songs include the rocking "Liar #1" and the busy "I Hate My Family", but there aren't any stinkers to be found, except for the title of "Thrash is Back in Town" (but the music is actually pretty good).

Many bands go for a retro thrash sound and fail ultimately because they're more about the 'look' and 'attitude' of the period, but simply copying Exodus and DRI and then calling it a day is not in this band's repertoir. Neurasthenia are good at what they do. It's clear they have a real love for their influences and they're worth checking out if you're into some of the bands I listed in the first 'graph. This is a better effort than their debut Possessed. I'm glad to hear some Italian bands playing this style, since we know there are so many of their countrymen engaging in the old heavy/speed style already.