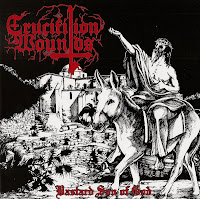 The latest EP from this German cult is a 4-track offering of snarling black/death metal, and for what it might lack in production values it makes up for with heart. The vocals are solidly within the former camp, whereas the grinding rhythm guitars add the deathstyle.

The band couldn't be more direct. It's quite easy to imagine a couple guys showing up in your garage, plugging in and churning out "Profanation of the Crucified" without even spending the time to write it. A few very simple riffs are repeated throughout the brief two minutes. "Blasphemous Punishment" is simpler though it follows a slightly quicker beat. "Moonlight Impalement" barely clears one minute in length, and features a few growls along with a slower Slayer-esque rhythm. The title track is the best on the EP, with a few evil riffs dominating the maniacal and hostile vocals.

Bastard Son of God clocks in below 9 minutes of total length, but you get the impression none of it is wasted. It's god a raw tone to it, with the guitars separated in the stereo channel to create a jamming effect. The bass isn't quite distinguishable here, I can't tell often if it's a rhythm guitar, but this doesn't hold the recording back. You can pick this up as a 7", so if you're a collector into the proto black & death sounds of the early 90s, it's probably worth your while. Simple and sincere, hostile and about as non-pretentious as you'll find.

label
Posted by autothrall at 8:33 AM