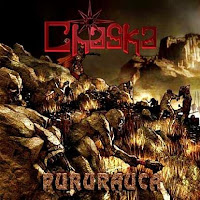 Let me preface this review by saying that Ch'aska have already got a winning formula style-wise; the use of traditional instruments like the charango and zampoña alongside a hybrid of old school South American thrash and death metal makes for an intriguing listen and creates a haunting and beautiful atmosphere at certain points of the record. Now, the metal ITSELF doesn't always live up to expectations, but there are enough points of positive fusion on this debut full-length to make it worth a recommendation to those craving a different style of folk metal.

"Bicolour Cannibalism" is the first track, a raging thrasher which is reminiscent of old Sepultura with a dash of Euro speed metal, flavored in the haunting pipes which drift alongside the verse and immerse you into this foreign world. "A Flower Brought Me Down" starts with some creepy acoustics and then has some of the finer metal riffs of the album. Some of the tracks I enjoyed most were "Nymph of the Lake" which plays out like a Peruvian Amorphis, gently balanced acoustics with raging mutes and melodies. The instrumental "Achuma" is pure folk for the first bit but then becomes a scorcher which wouldn't seem out of place on Beneath the Remains. Here, Ch'aska makes a flawless use of their aesthetic, all it is missing are the vocals. Speaking of which, Carlos Raffo alternates between a throaty and raw harsh style and a soothing, clean register. It works well. Another of the better tracks here is the epic title piece, over 14 minutes long. As for the rest of the tunes, they're passable but not memorable.

The album has a natural, raw tone to it, really capturing the folk and thrash without sounding entire digitized or overbearing. It sounds like it could be pulled off live. Pururauca is a solid debut album, and it's one of the most successful I've heard at incorporating the South American folk elements. Many bands have tried this thematically, but I've yet to hear the one that can really knock me flat (maybe Chaos A.D., maybe not). Ch'aska has come close to delivering that here, and if they can maintain and evolve this sound then their future looks very bright.