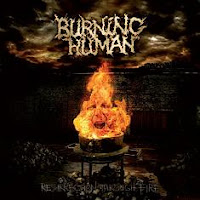 New York's Burning Human represent to me exactly what NYDM should sound like. Brutal and entirely pit-friendly, with an almost hardcore aesthetic lurking below the chug and blast while still possessive of a technical edge to sate the death metal purist. This is no typical deathcore or metalcore act, but it's just as appealing to the street crowd. You might think of it as 'tough guy' death but the band isn't writing about anything quite so trite. That they open the album with such a strong track in "Tormented Mind" was enough to grasp my attention, but they don't stop at that. The rest of the album is also good.

After a dark ambient intro, the guitars churn forth over an ascending drum roll, then the riff transforms into a groove while a tasteful lead stretches across it. This is "Tormented Mind", and once those dual grunt/snarl vocals erupt over an intensely violent riff you know this is a band that will be responsible for MANY bruises and broken bones over the course of their live career. The song is quite simple, but has a few flourishes of mildly more tech death metal. As if this weren't enough, the real breakdown hasn't even arrived until about 3:40 in the track, when it clouts you over the head in true Earth Crisis fashion before transforming back into some nice death metal riffage. "As Good as Dead" continues the beating with a riff reminiscent of old Death and Obituary, a mid-paced flow with some nice slower shifts using creepy chords ala early Pestilence. It's another of the best on the album. "Chemical Experimentation" is all fists flying and sickness, and the rest of the album follows suit.

The sound here is quite good. Thick and brutal guitar work over a vibrant kit. The vocal styles are both executed well and despite all the simple mosh and groove of their approach the album never becomes boring and it puts to shame the vast majority of boring slam/death metal from this country. Burning Human are not quite original, but they take the very best elements of classic death metal cred, street core aesthetic and a penchant for brutal 'swing' to create a successful debut. I'll see you in the pit!