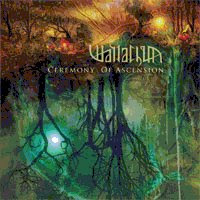 Wallachia is an interesting band on the Norse black metal scene; their style doesn't fit in with either the true old school flavor (Mayhem, Burzum, Darkthrone, etc), nor does it jive with the more brutal, modern end of the spectrum (1349, Emperor, etc.) Instead, they fuse a lot of diverse elements into the sound, from death and thrash to symphonic/progressive metal.

"Self-Inflicted Stigmata" sets the pace, more of a straightforward thrash/death piece with a few discordant, bouncy tones. It's not one of the better songs on the record, as it breaks into some very dull and forgettable riffs. "Refusalvation" begins with a melodic mid pace, almost folkish metal and then the synths erupt along with some black snarls. This song is a little catchier, but then the band heads back into the thrash/death territory with "Kamikaze Christians", mostly pretty bland though it does have an atmospheric, melodic break in the latter half of the track. "Rival of a Cursed Destiny" is a mixture of black and crispy speed/thrash with some of their glorious melodies and slight synth accompaniment. "Sanctimonia XXIII" is one of the better tracks, a symphonic black metal anthem with majestic overtones. "Genesis Enigma" utilizes a clean gothic tone to the vocals. "Void Expansion" was another of my favorites on the album, simmering and glorious.

While Ceremony of Ascension is by no means bad, it often feels a little out of focus. Though clearly a hybrid of styles, the diversity of the band never comes across as a strength. I got the impression that if there were more songs in the vein of "Void Expansion" I would have become more immersed. A few of the tracks feel like filler. Also the guitars feel a little thin and crispy, they could use beefing up to add power to the compositions. Still, there are some intelligent minds at work here, the concepts and lyrics are interesting and the cover art gorgeous. If you're seeking some left of center Norse black metal, I daresay 'progressive' black metal, then you could do worse than give Wallachia a try, otherwise I feel the album is a little inconsistent to give higher recommendations.