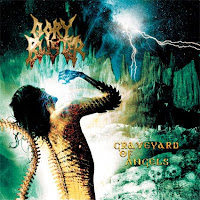 This Italian band's previous album Skymorphosis was quite the surprise, an album of progressive death heavily influenced by the later Death discograpy. The follow-up Graveyard of Angels (their 3rd full-length) drifts further into the band's own territory, a careful balance of melody and brutality. Despite a better production, the riffs here didn't catch me quite as much as those on Skymorphosis, yet the album is still recommendable if you like your death/thrash melodic with brutal vocals.

"The Hatch Opens" is spearheaded by its use of glistening mid-paced chords, evoking a transcendental, almost cosmic vibe before the track opens up into vicious sledgehammer death. The band busts out some of their prog metal essence within the lead, but the track actually reminded me of mid-period Cryptopsy over all. "Void Made Flesh" is a pure rager with some acrobatic groove and a pretty melodic breakdown involving shred. After this, the album actually picks up for a few superior tracks. "Vanishing Ruins" is a nice piece of progressive death with captivating riffs and atmosphere. "The Descent" is tech death fused into thrashing rhythms. The instrumental "emiT despalE" is immersive and powerful. Another of the stronger tracks on the album is "The Shining Hades" for some ripping riffs.

Graveyard of Angels is mixed with a clarity that can balance the melodic grace of the band's leadwork and riffing with the bludgeoning brutal shell enveloping it. This is primarily a guitar band, most of the head-spinning you'll get is through the leads. Otherwise they don't indulge in the stark technicality of some tech death acts. Gory Blister are very much in the habit of writing songs, not exercises in musical virtuosity. This particular album reminded me a little of the recent debut from Centaurus-A of Germany, who have a similar (but better) approach. Although this is a focused effort, I was marginally underwhelmed by a number of the tracks. But it's likely that other fans of technical death metal with high standards are going to lap this right up.