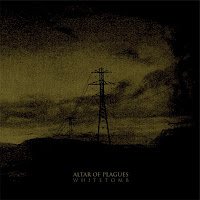 After a tasteful pair of EPs, Ireland's Altar of Plagues issue their debut full-length through Profound Lore records, and if you were a fan of their brand of swelling ambient and melodic, melancholic black metal then you are unlikely to be disappointed with this.

White Tomb consists of two tracks, each divided into two sections, and clocks in just beneath 50 minutes. "Earth Pt. I: As a Womb" sets off the album with a crisp grace; a monotonous, progressing synth saturated in sparse guitar plucking and then a crescent of feedback, migrating into a blast beat and wall of driving chords beyond the 2 minute mark. The track wanders through numerous sequences of chords, all are very pleasant if at times repetitious. "Earth Pt. II: As a Furnace" is even more breathtaking, with some scintillating aggression and lush acoustic/folk segments, a post-rock edge throughout much of its discourse. "Through the Collapse: Watchers Restrained" opens with some of the heaviest black metal on the album, but then devolves into a creeping, minimalist landscape of snarled spoken word over chagrin inducing black doom. "Through the Collapse: Gentian Truth" is a majestic piece which winds across the morning hills like a mist, again breaking down into minimalism, but in its case a sort of ambient with distant vocals...perhaps the most telling moment on the album.

The imagery conjured through Altar of Plagues is not one of abandoned forests and mountains, but the dark and forgotten underbelly of urbane, mundane existence, transformed into a dark beauty often overlooked. Listen to this as you overlook an empty city at 5:00 am sunrise. This isn't something one is often exposed to through this medium of metal music, and it's certainly this band's forte. White Tomb also sounds quite good, the guitars are immersive throughout. The vocals tortured. The drums flowing and expressive. It's a difficult journey to leave once you set foot down its path, and superior to their previous EPs, which had already promised at a rare potential.