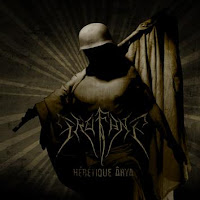 While I certainly favor the more experimental of the French black metal acts (Deathspell Omega, Blut Aus Nord, etc), there is quite a large scene going on across many black fronts. Profane have a fairly direct take, a well-produced execution akin to several Norse and Swedish influences. I hear a little Mayhem and Dark Funeral in the sound, and while you won't come away feeling as if you've just encountered something trailblazing, this isn't bad for a debut.

The first track "Ennemi Du Genre Humain" is a fast and twisting tune anchored by its forceful, melodic rhythms and the full-bodied snarling of Necrose. There are a few moments where the pace is slowed slightly, but I didn't find any of the riffs here memorable. "Sur L'enclume De La Race" is a more furious manifestation, but again suffers from some monotonous riffing which did little for my tastes. The title track gathers some of the most glorious riffs on the album and has some well placed backing shouts, but again, mediocre. "Pa Vikingtod" is one of the stronger tracks, more of those timely gang vocals and a riff here that is almost catchy. Another of the better tunes is "La Parole Obscure Du Paysage Intérieur" which conjures a somber mystique with its whispered and spluttered French vocals, then erupting forth into glory.

The band's tone is definitely not a weakness, Hérétique Ârya has a brazen, bold delivery with bass grinding below the unrelenting chord battery. A very professional sound for a debut. The major downside to the album is just a lack of memorable or evil riff writing. Fans of glorious war/black metal with decent production standards might do well by this album, but personally I found nothing to grasp on to (only hints of grace).