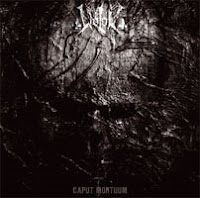 Let's try and imagine for a moment what black metal might sound like if Martians starting writing and releasing albums to the genre. That would probably some downright familiar compared to the bizarre creations of this French outfit, whose deranged approach to this style is a hybrid of asphyxiating neurosis and effects. Though it's only my first personal exposure, Caput Mortuum is actually their third full-length.

"Bacterium Dei" opens with a barrage of warped minor chords and uncanny infected notes, before launching into this incredible segment of slow, lurching chords fellated with Lhükkmer'thz vocal vomit and distorted guitar atmospheres. While the core retains a black metal aesthetic, the overall effect is truly alien. "In Vacuo" begins like extra terrestrial shoegazer black metal, like if My Bloody Valentine lost a bet and had to record an album with Attila Csihar or something. Quite incredible. "Transubs(a)tantiation" is another track making use of a stop/start lurch, interspersed with some swerving bass and double kick. The remainder of the album is equally intriguing, from the noisy orgy interlude "Repellence Serum" to the fucked demented "Necro Priapus Worship".

These three space cadets are no stranger to the more eccentric variety of French black metal, as they hail from bands like Zarach 'Baal' Tharagh, Devilish Era, and the more industrial La Division Mentale. Wolok, however, is their most insane creation, and I found myself hypnotized by the dark and alien sounds. I will certainly be tracking down the band's earlier albums, and this is an easy recommendation to make for fans of the 'outside the box' French scene like Blut Aus Nord, Peste Noire or recent Deathspell Omega. This is one of those 'what the fuck' releases that any discriminating gloom dweller need endure.