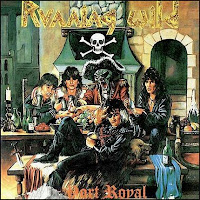 You wanna know where you are? HA HA HA HA! In Port Royal!

I once dismissed Running Wild, but after some further exposure to the band induced by someone much wiser than I, I had a change of heart, and it didn't even take long. As Boutros Boutros-Ghali said, only stupid people don't change their minds. They are simply: traditional speed/power metal with a pirate theme, putting out masterstrokes of metal in this vein long before the sudden surge of ironic pirate worship and "pirate metal" bands like Alestorm.

One of those masterstrokes, Port Royal, was their fourth full-length, yet only their second of the swashbuckling persuasion. After the memorable intro, you are grabbed by an umistakable riff, so emphatically piratical, impressive considering this was 1988 and the only music to exist in that day certainly was not metal or anything close. Looking beyond the driving theme of the album, there is still so much musical merit, the tunes catchy and killer, the lyrics not what you would expect from a big hair metal band singing about pirates in the eighties.

Rock 'n' Rolf Kasparek's could not be more fitting, one of his finest performances, vocals reverberating ever so slightly in the album's superb production. Literally every song is awesome. "Raging Fire" has a hook so catchy it can and has kept me up at night looping in my head, supported by one of many superb ripping guitar leads, smooth as the masts of a sleek corsair ruffling in the wind.

"Uaschitschun" and "Conquistadores" have the swarthy sound in spades, yet depart from the subject matter somewhat. "Uaschitschun" is a sentimental Native American piece commenting on their freedom (or lack thereof), which is a thematic undercurrent of the album. "Conquistadores" continues the movement, a furious solo sinking its talons into your skin as Running Wild proceed to decry religion.

One of the best songs is saved for last, "Calico Jack" an eight minute tour de force. An acoustic prelude serves as the calm before the storm of the song which takes you directly into the Spanish Main circa 18th century. The song's namesake is defiant to the last, detailed with another memorable spoken section that bookends the intro of the album nicely.

If you have never experienced Port Royal, get some rum, kick back, and enjoy one of the most glorious, original and well-excuted albums to ever be released in metal. It makes me proud to call myself a fan.

Sweet review. However, did you mean to put "the only pirate music to exist in that day" in the second paragraph?

Looks like I got muthafuckin' ninja'd on this one. It's my own fault for putting it off so long.

Unicorn: No, I was attempting to convey that the music of that time was very different from heavy metal, which makes Running Wild all that much more impressive that they can sound so pirate-like.

Auto: I'm happy you liked the review. Thanks for showing me the light. :D Also, there is still other great albums of theirs up for grabs. :)