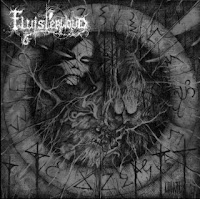 One of the most interesting of the cult Dutch black metal bands has returned for their 2nd full-length, six years after Langs Galg en Rad, and I am cannot claim any disappointment. Notable for their deceptively loose approach to the form, incorporating jangling suicidal chords and an almost pyschedelic groove to the more familiar relentless blasting and driving despair, they spew their black ichor across seven tracks.

An elevating, carnal sneer rips forth the album into its first charging blast, but the title track then mellows into a mid-paced groove which reminded me of proto-sludge. It then mellows even further into a simple but mesmerizing repetition of simmering chords, before returning to its roots. The bass winds beneath the charnel house chords of "Kerkganger" to provide a mystical opiate, the drums shifting from a rocking pace to blasting to create a warm yet uneasy effect. "Verloste in Het Vuur" opens with a somber, gracious presence, the drumming converts to a sort of field march during the bridge. "Met de Wind Wedergekeerd" seems the typical mid-paced grim black anthem, yet its chords create a strange effect, like a Sonic Youth of black metal. "Hoemannen" is similar in structure, once again vague unfamiliarities in the use of discordant note selection separate it. "Mijn Donker Wezen" is one of my favorites of this album, its rummaging bassline and malignant chords are both sobering and mesmerizing. "De Bezetene" is the closer, a slow groove alternating with some pick up blasts as the discordant notes frighten and mystify.

Laate Alle Hoop Varen is a short expression by some standards, just over 27 minutes long, but contains no dull and unnecessary filler. It's a consistent offering from one of the best of the grim underground in Holland. The lineup features members of Sauron, Dimensional Psychosis, Planet AIDs and of course the amazing Galgeras. Though they do put their 'twist' on the material, at the core it remains raw unadulterated black metal. The mix is very simple, a pure translation of the musicians, balanced nicely.

Sadly, this is yet another posthumous recording. The band recorded this in 2006 and has since split-up. But it's better to have it than not, so if you're a fan of black metal whose heart beats slightly left of center, but with the blood of pure blaspheme, indulge yourself.