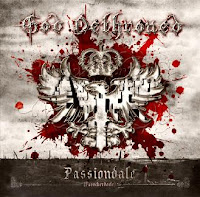 I was rather underwhelmed by the Dutch band's previous effort The Toxic Touch, especially after 2004's The Lair of the White Worm was so good. Passiondale is their 8th full-length and a concept based around the city of Passendale in WWI. It falls between the last two albums in the quality of songs, but the execution of sound here is superb, crushing.

God Dethroned have always had a Swedish melodic death influence in their sound, and this album is no exception. The first few tracks "Under a Darkening Sky" and "No Man's Land" are crushers which alternate faster melodic riffing with some ravenous grooves. Despite the fact that the tracks sound great, they didn't do a lot for me. "Poison Fog" improves the situation considerably with a nice grinding riff and a nice touch of atmosphere during the bridge. "Drowning in Mud" kept the blood flowing with a good rock out riff intensified into speedy melodeath riffing. The title track "Passiondale" opens as a slower paced, epic march rhythm, and remains at a lax pace but quite beautifully executed, with a repetitious, effective melody under Henri Sattler's cries of no escape from Passiondale! The rest of the album is also pretty good, with highlights of the quickening "No Survivors" and the great "Behind Enemy Lines".

The killer here is the tone. The guitars swerve and groove with bombastic Marshall crunch and you'll not find a better sounding record in the band's entire discography. This album also has that simplistic 'war metal' style which should appeal to fans of Bolt Thrower or Hail of Bullets, though God Dethroned are faster. It took a few songs to get going, but once Passiondale had me in its clutches I was attentive for the rest of the ride. Good to see this band standing strong with a partially new lineup. Well worth a listen.