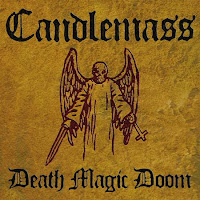 Candlemass return for their 2nd album with new vocalist Robert Lowe (Solitude Aeturnus), a rocking out affair with a number of faster paced songs, yet still cogent of their strength for resounding, slower gothic crush. Perhaps it's the vocals, or the songwriting, or both, but I was left less than inspired by this record. In fact it's probably the worst Candlemass album since the mediocre Chapter VI. Boring enough that a second and third listen were increasingly difficult, as any errant distraction (a fly buzzing past, or a car) could instantly pull me away.

Robert Lowe does not have a bad voice, it's sharp and crisp, and certainly he has the repertoir and qualifications for this duty. But his voice is just...so plain for this band, lacking the powerful operatic theatrics of Messiah or even the chagrin of Björn Flodkvist. He can hit all the necessary notes but I just don't feel any power here; crucial for effective doom to mine ears. He's not helped by the songs, the faster tracks like "If I Ever Die" and "Dead Angel" are forgettable, and it's only on a few of the slower tracks that I felt my attention span increase. The strings in "The Bleeding Baroness" are nice. "Demon of the Deep" is a pretty good track overall which recalls the old days and feel of Epicus Doomicus Metallicus. "Clouds of Dementia" is another of the better offerings, a crushing lament.

Death Magic Doom isn't bad, it's just not up to snuff with the band's past works. I actually quite enjoyed King of the Grey Islands, even with Lowe singing, so this is somewhat of a disappointment. It's unlikely the band could manifest another Nightfall or Ancient Dreams, but I shall continue to mourn for those days.