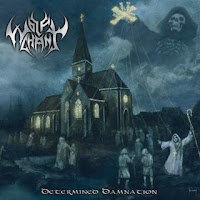 I must admit I've not been a fan of this band's previous output; the previous albums were average at best and I made a mental note that this might be another of the million bands posing out in the forest with paint smeared over them and weapons they purchased at some folk or renaissance faire. Avast, thar be pagans! However, this third album Determined Damnation deserves a fair shake as its a catchy enough slab of dirty folk tinged black metal which often borders on the glorious aspects of melodic death.

The majority of the tracks here are of that 'charge' variety, carried by the barking vocals of Lokhi and the majestic guitar lines, while the rhythm section batters away. If you found yourself standing at one of the band's gigs, these tracks would no doubt have you swilling your honeyhorn and shaking your fist. This is the case for the first few tracks like "World in Ice" and "Until the End". The band also has a darker, more serious edge, as that present in the title track. During the chorus, the snarls are joined by clean and manly backing vocals, for a second it reminded me of a Grave Digger chorus (and that's a positive thing). There are a few pure folkish parts like the intro track "Determination Begins" or the opening of "In War". Though this isnt' a band to fuck around much, the track "Never Too Drunk" may come off a little cheesy in the midst of the more interesting fare. The music to this song is quite nice, but the lyrics, well...

Determined Damnation breaks no molds and it honestly does not stand out much from many of the cliched bands out on the party pagan metal scene, but it's superior to the previous Wolfchant albums and I found myself enjoying it, for the most part. The band is best when it's delivering darker rhythms like "In War" and the title track. If you're into similar bands like Finntroll, Helfahrt, Heidevolk or Asmegin, they are worth a listen.

I actually really enjoyed A Pagan Storm, definitely checking this one out