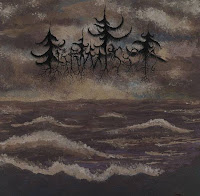 Ever surfing the information highway for new bands to report, I was fortunate to come across this s/t Dutch demo. The three members of Irrwisch are all formerly from another band (with a similar forest logo) known as Widergeist, which also released a demo last year, but appears now to be defunct. Irrwisch has the rare talent to concoct miserable elixirs of dense and atmospheric black metal of the 'depressive' vein. But rather than corner the band into such a cluster, they appear to have much more than this going for them.

Simple melodic guitars are usedto create a fuzzy, crisp, ambience over the swerve of the bass and crash of the drums, evoking mesmerizing atmospheres of melancholic days apart from civilization. The five tunes ebb and flow like the waves on the demo's cover, while the vocals paint the tortured existence of a soul flayed bare. These are the type of vocals you hear a lot amongst the depressive black metal crowd, focusing more on despair than a snarling, venomous attack. But the very basic guitar riffs used here create an almost overflowing sense of pride and warmth, anything but depressing. The tracks interlock seamlessly, a single voyage in five segments. I found "Leer" and "Irrgang" to be slightly superior to the remainder of the demo.

Irrwisch has a lot of potential, and I'd recommend this sampling to both purists of the suicidal/ atmospheric black metal scene (Drudkh, etc) and well as any bleak soul seeking something obscure, beautiful and pagan. An excellent start and I'm eager to hear further demos or a full-length.