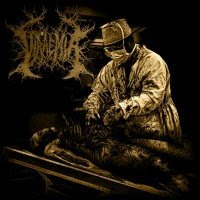 This was a difficult review to write as I found the band's staggering level of noodle riff proficiency both terrifying and confusing at first. Once I was able to crawl forth from my cavern, both feet on solid ground and take stock of my surroundings with a rock and stick for defense, I realized the truth of my situation: I was in a brave new world of acrobatic death metal the likes of which you simply DO NOT often hear from a demo-level band.

Viraemia are indeed one of those young bands which will make you scratch your head in astonishment when you hear the dual guitar and bass plugging of Josh Hernandez and Scott Plummer. Each of the 5 tracks on the EP are so frenetic and bewildering that all but the most hardened guitar aspirants are likely to quit their lessons and take up something safer...like crochet. Here's the kicker: I generally hate this type of shit, spastic excess which comes at the cost of effective and memorable writing. But Viraemia are a rare exception in that their devotion to this style is so prevalent that they actually tear open the fabric of spacetime to create a cartoon universe where the NORMAL laws of physics ARE the intense volleys of squiggly and paranoid guitar taps and wails, with the deviant phenomena occuring through the band's sparse application of brutal grooves (which are honestly not as impressive, but crucial in that they give the listener a break).

The vocals alter between Salacious Crumb grind snarls and a brutal low end while the drums of Michael Collins somehow manage to reign in the wild guitar and bass into something like a song. The tracks are all consistent, but I'll give "Necrotizing Fasciitis" and "Pit of Pestilence" the slight favor as they frightened me the most. Viraemia is a band likely to attract a lot of attention among the technicality starved masses in the USDM scene and beyond, I imagine this would make a good match for Willowtip or a similar label. I wouldn't be surprised if they were snapped up by the time I finish this review. In the meantime you can order the EP directly from the band.