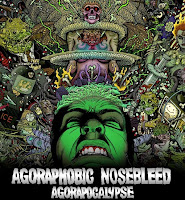 US grinder gods Scott Hull and J. Randall return for what is being billed as their 2nd 'proper' full length album, an intense blitz of thrash riffing tightened by the throat into a grinding death fuck fest. The tones of the album sound vibrant, from the caustic turbulence of the guitars to the 3 vocalist barrage. Randall is joined by Richard Johnson and KAT as they offer up a variety of shouts, growls and snarls which lend a density to the songs which few peers can muster.

Intact are the amusing socio-political lyrics and fucked humor of the band, if tracks like "Dick to Mouth Resuscitation", "White on White Crime", and "Flamingo Snuff" are any indicator. As always, the band meshes plain old cock'n'balls street talk in with the more serious implications in the lyrics. Most impressively, Hull is a veritable farm of brutal riffs. They're not always catchy, but they are always organized into a fashion to propel the songs through their admirably brutal affectations. Some of the more exciting tracks on the album include "Moral Distortion" and the guttural slug fist of "First National Stem Cell and Clone". "Agorapocalypse Now (Loneliness of the Long Distance Drug Runner)" is another fun track with its distorted grooving bass erupting into uncouth leads and punishing grind. AnB have always been great at programming their drums into dense machinations of chaos. This album is no exception.

There aren't as many tongue in cheek experimental tracks this time out as there have been on past efforts, and in the end the album never quite rises above what I shall know henceforth as the 'grind barrier'. That is, many of the riffs here sound like countless other grinding riffs you've heard a million times from bands like Napalm Death or Brutal Truth or Nasum or whatnot. This isn't a knock against AnB, because they can match intensity with nearly anyone. It's fun to blast your way through the album alongside these demented bastards, and the use of multiple vocalists is beneficial, but very few riffs or tracks on the album illicit a replay mentality. Alas, it's difficult to elaborate further, and perhaps most grind mavens simply do not give a fuck. The album is brutal and fun while it lasts, just long enough to grant you the ringing headache you deserve and expect.