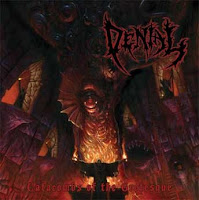 I've never been a fan of much Mexican metal, aside from the rare exception like Hacavitz. This applies to not only death metal but most of the styles popular there. However, the debut from Denial is out to change my perceptions. Try and imagine a hybrid of Bolt Thrower and Demilich. Yes. The tone and style of Catacombs of the Grotesque ends up somewhere in this realm of possibility.

These gentlemen are no new kids on the chopping block, they hail from Mexican death veterans like Cenotaph, Pulverized and Shub-Niggurath, but I'm going to be honest: this album destroys anything I've heard from their past bands. Lurching and shuddering like a hellish titan unleashed from cavernous depths, the album captures the horrific, unrelenting aesthetic of true death. You can pick any track at random here and be floored. "Abominable Undead" is a disgusting, slower paced fist in the eye of the living, and Marko Guevara's vocals are so huge and dominating (in a good way) that it took a forklift and several laborers hours to retrieve my jaw from the floor. "The Pestilent Pits of Disgrace" is another monolith of gutwrenching death, and "Necrotic Invocations" is one of the faster tracks, one of my favorites here. The band have revived a few of the tracks from their previous Immense Carnage Vortex EP for inclusion, and they also sound great.

Denial knows exactly what tone will render their creations most effective, and bombards you with these extremely dense and meaty guitars. The material here is not technical, it's just effective in a darkly old school sensibility. Each track burdens you with an impossible weight of despair and dread. You feel the alien subterranean force of the cover art creature calling to you at each turn. Give yourself to me! Feed yourself to me! Truly cavernous and unnerving debut album here, once of the best death debuts I've heard in 2009 alongside Tribulation, and if you fancied my recent reviews of Funebrarum and Vomepotro you will also want to hear it. Essential listening for the morbid purist and flesh florist.

"Try and imagine a hybrid of Bolt Thrower and Demilich."