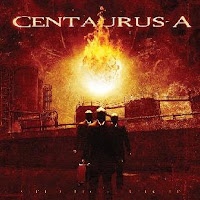 Another of those debut albums which comes out of almost nowhere and literally beats the surprise into you, Side Effects Expected is a tech death head's dream of calculated grooves and winding, well-constructed death/thrash rhythms which should quickly snare your attention. I say 'almost nowhere' because the band has actually been around since the dawn of the millenium, releasing a slew of demos between 2000-2003. After a six year silence, they return to produce one of the more impressive death metal debuts of late, and we are all the richer for it.

Now, Centaurus-A are a technical band with great ability, but they understand that this NEVER comes at the cost of great songwriting. Each of the tracks on Side Effects Expected has a number of fetching riffs which serve as anchors to the more frantic paced exhilaration of the leads. "The Praying Mantis" opens the album as a tour de force of the band's precision skills. Choppy, sporadic guitar bursts excrete neuroses above a perfectly diamond honed laser battery of percussion. In spots the band recalls a groovier Theory in Practice, but they put to shame a lot of other tech death acts who just don't know how to use their talents to write a proper song. "Narcotic" creates a frightful and ambitious journey to the clinic medical locker as a string of polarized emotions chokes your neck. "Drop Off" transforms from an automata of surefire mechanical thrash into a lightning paced missile launch, later braking for some extremely catchy grooves. Most of the tracks on the album are highlights, but the glorious "The Ease", the thrashing "Arson" and unrelenting bounce of "Dripping Red Canvas" are among those which resonated the most for me.

For a debut the album has a killer production which expertly captures the precision of the manic guitar work, and crash of the snare and bass as the two juxtapose. The vocals here are your garden variety grunts and growls, blunt and percussive, fully functioning within the band's style without becoming overbearing (like you'll hear in a lot of US spazz-tech death metal bands). Centaurus-A is quite able to shift from melodic, thrusting rhythms and leads into their focused, jerky thrashing and the balance makes for a diverse listen, not to mention a massive payload for future potential. We waited 9 years for this band's debut, let us hope we don't have to wait another 9 for the follow-up. Side Effects Expected is a killer album, and this is a band to watch if you fancy death and thrash metal which is technical and well-moored, never losing itself to baseless indulgence.