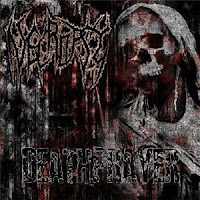 There have been many bands throughout the years to wield the title of Necropsy; alas this is one of the German necropsies here to offer their debut of chugging death metal which rarely exceeds a mid pace. Almost tailor-made for the careening, violent mosh pit windmill kicks and jabs, Deathprayer is no less than 100% carnage, falling somewhere between Bolt Thrower and Suffocation in style.

One of the strengths to this band is their tone. The chords carry a perfect amount of crunch, and the majority of the rhythms are written very low on the guitars to maintain an impenetrably dark and dense atmosphere. Vocalist 'Chriggy' has a suitable grunt which sloshes slavishly amidst the bludgeoning tones, while the drums deliver a payload of snaps and grooves. This band could probably transform any show into an immediately bloodbath, because tracks like "The Chosen One" and "My Tormentor" simply roll human beings over like a tank (the latter gets a little mathematical and playful during its bridge, with some nice riffs).

That said, while I found the album fun for a listen and a few of the riffs fairly competent and punishing, the majority of the material here isn't something I'll want to come back to. There is a certain sect of primal death metal purists who will devour this album. Whether they fancy the old school bands I named above or the simpler slam death scene of modern times, I can't imagine they would be immune to this albums trash compactor grooves and lumbering mayhem. I found nothing necessarily bad about the album, just very average. Necropsy have their heart in the right place. They've got a heavy as fuck tone, and it's obvious they are writing some real death metal, perhaps on their next album I'll dig more of the individual songs.