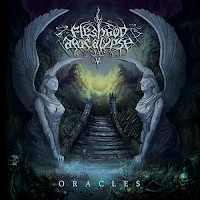 Fleshgod Apocalypse are an explosive technical death metal act from Italy who have wisely chosen to sign with Willowtip for distribution of their first full-length release (Candlelight in EU). This was an excellent decision for all parties because their brand of choppy blasting, swift lead precision and tech stomping will undoubtedly create salivation among the many US fans of tech deathcore (Job for a Cowboy) and brutal death (Cryptopsy, Necrophagist, Suffocation, etc). Oracles is a good album, because despite their obvious ability to create sickening pit grooves or noodle off into arpeggios at any turn, they focus on what's most important to this style: the creation of bewildering, grinding and winding riffs that can hold the attention of the death metal purist through the creation of a caustic and blood pumping environments.

This isn't to say Fleshgod Apocalypse are very original or that Oracles is a masterpiece. It contains a lot of what we expect to hear: mute chugs for moshing, mute to squeal riffs, and average brutal grunts. But their use of chants and classical interludes between the tracks is a nice touch, and they incorporate enough hyper melody into the mix to keep each track interesting. They also focus on occult and philosophic lyrics rather than the all too common gore and perversion. As far as specific tracks, there aren't many that stand out from the remainder. The album is consistent in quality. I might give a specific nod to "Post-Enlightenment Executioner" for its killer song title and really laying the smackdown or "Infection of the White Throne" for the frenetic pace and cavorting melodies, but if you like any one track here you are going to like them all.

Oracles sounds fully functional, though the bass is often lost under the punishing chug/blast combo. Drummer/guitarist Francesco Paoli is also a member of Hour of Penance, another good Italian death metal outfit (in particular for The Vile Conception) and he excels behind the kit. There is a high caliber of talent in all of the musicians, and I'd easily recommend this album to fans of Severed Savior or The Faceless who have both recently released great tech death.