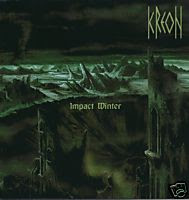 Yet another quality release from a new German death metal band. Kreon are a little rough around the edges, which one might expect of a newish band, but the guttural hammer of J. Morti Uhlig's vocals and the slight technical flourishes balance nicely to forge a work of some promise, and Impact Winter will likely stir some waves across the rank and file of 90s USDM purism.

"God is Beauty" explodes with a volley of spastic guitar and bass before the graveled, Morbid Angel tones of Uhlig's vocals enter the arena, a nice lead bellied counterpart to the rather crisp and wafer thin razors of the guitars. "Imminent Impact" seems sloppy initially, it accents a central, brutal old school groove with some jangling note selection that did little for me but distract me from what I really wanted to hear, the core rhythm of the track. "Name Your Poison" is a faster flurry of technically tempered molten steel, but it's not so heavy or memorable. The chaos of "Reinvent the Wheel" has a nice mix of thrash riffing and primal abuse. Other decent tracks include "Rage Boundary" and the epic title track which closes the album.

The production of Impact Winter is decent, in particular the bass playing sounds distinct and nicely rounds out the crisp mute picking of the guitars. Uhlig's voice is just killer, this guy is like a tear in reality through which some extradimensional Satan is intoning the end of our universe. As for the song writing, some of the tracks wander off in directions which do them little good, but the jist of the material should be enough to please a fan of say...Suffocation. It's at least a worthy debut, if nothing outstanding.

Posted by autothrall at 5:27 PM