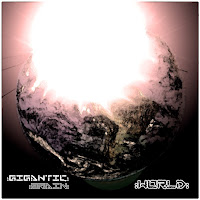 While I don't normally go out for the cybergrind, there was something alluring about The Invasion Discography and its 60+ tracks of sci-fi (or just plain odd) brutality and mischief. While it was clear from that album that Gigantic Brain was interested in more than just blasting and grunting, the new album World has come as quite a surprise...the grind is still there, but the majority of the album consists of Godflesh-like melodic industrial grunge and lush, alien instrumental synth scapes.

I am once again subject to the psionic domination of the Gigantic Brain, because I really enjoyed this. Of particular note to me are the instrumental tracks, they shine with ambient astral light for all their simplicity. "We Come Together in Hell" and "Debris" are great, and they even manage to mesh grind, samples and ambient together in "The God in Flames", another of the album's strong pieces. As for the slower melodic industrial tracks, "We've Reached the Stars" and the instrumental "Eons Pass" both stand out. If you're worried about the Brain losing its edge, fear not, because there are still numerous flurries of savage cybergrind, below the minute mark. "Colors of Bone and Blood" and "Melting Brain" are both as destructive as anything on the previous album.

What's missing? Well, the conceptual void of space lends the album a rather serious aesthetic, so the wealth of humor from The Invasion Discography is nowhere to be found, that is if the fact you are listening to a cyberambientgrindustrial band called Gigantic Brain isn't comic enough already. I was rather impressed with this change of pace, something transient and wonderful has been evoked here. I'm also glad this project wasn't some one shot product of a drunken or baked night of dork revelry (I realize they have some other EPs in a similar vein which passed me by). Looking forward to more!