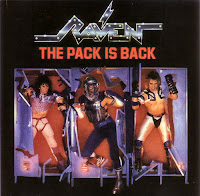 Raven has long been one of those bands difficult to take seriously; their gaudy and ridiculous stage outfits and balls to the wall attitude have likely turned off many a metal fan. Theatrics aside, they have always been one of the creme de la NWOBHM creme, delivering many albums of high quality melodic heavy metal which is both catchy and fun. They are also one of the best live bands I have ever witnessed, especially for a three piece.

The Pack is Back (their 5th full-length) may not be the equivalent of a Wiped Out or All is One in terms of memorable riffing and impact, but it deserves mention alongside the band's other killers like Stay Hard and Life's a Bitch. This is also one of the band's more accessible records, saturated in some synth and guitar effects and with numerous built for radio tunes. The title track kicks things off with a mid-paced anthem and catchy layman chorus, as well as a nice guitar melody. "Gimme Some Lovin'" is a melodic hard rocker so if you're into that cheesy strutting style ala David Lee Roth then blast it. "Screamin' Down the House" should appeal to fans of Ratt or Twisted Sister who desire some rebellious party metal. The album picks up a little with "Young Blood" which is all the more metal, yet still very catchy. "Hyperactive" and the silly head banger "Rock Dogs" return to the more commercial vibe. Some of the other standout tracks are the heavier "Nightmare Ride" and "All I Want".

As I said, this was built for some radio play. The mix is clear and professional, and I'm not sure this entirely works in its favor. A dirtier approach would have livened up a few of the tracks, and it does feel as if some of the raw energy of the band is constricted. Regardless, there are still plenty of good hooks and John Gallagher's catchy vocal melodies. Sadly, this album did not catchy on, a lot of Raven's fans don't like it because of the ramped up accessibility and excessive party metal atmosphere. However, if you can listen past your preconceived notions and accept it for what it is, it's a great album with a lot of that lost 80s hairspray/hard rocking appeal, and there is enough pure Raven here to at least pick up on a few tracks.