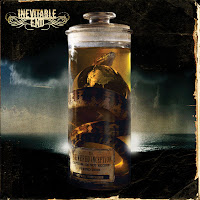 Relapse has recruited themselves another riot act. Flogging at the borders between extreme thrash metal, death and grind, Inevitable End discharge a punishing debut of spastic intensity which will likely enthrall the key demographics (grind or extreme metalcore fans take note, and I'm not talking the everyman shite metalcore, but keystone acts like Coalesce and Converge). While I found my head lunging this way or that to the band's myriad of fluctuating, fast rhythms, I found the album lacking in memorable tracks.

Nevertheless, if speed and brutality is your modus operandi, you could do a lot worse. This is essentially a form of musical acrobaticism, with a lineup tight enough at their individual instruments to pull it off. Songs like "Collapse in Reverse", "Perverting Incitement" and "Embracing the Origin" incorporate blinding death/thrash rhythms with crisp complexity, but never shy away from the change to shift into intense and spasmic breakdowns. To be honest, the track I enjoyed most was "Apprentice Luminous Acquaintance" for its slower pace, plodding distorted basslines and freaky post-metal riffing. Sort of like a grind Voivod. Of the faster material, "The Art of Corruption" had my blood quickening and pulse pounding in my skull with its hyperactive, slamming maze.

The album has a crisp tone to it which emphasizes their catalogue of riffs. The drumming of Joakim Malmborg is the perfect anchor to this slugfest, and the bass is likewise a menace. The vocals range from your grinding snarls to a more barking deathcore style, and while I didn't care for their presence much I can't fault them with why I didn't enjoy the album more. The band has enormous potential and often creates an extreme webwork of intensity, but I'd like to hear some catchier specific riffs on future efforts.