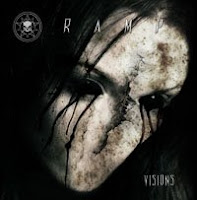 Although practically unheard of in the crowded underground, Portugual's Ramp have been around for 20 years now with their modern/groove approach to thrash. Visions is their fourth album and while it does feature a few of the bombastic nu-grooves which stagnate many a band of this type, there are some solid thrash riffs here, with a lush Daniel Bergstrand production. Rui Duarte also has a voice which can range from tough guy metal angst to catchier chorus melodies without coming off contrived.

The band is not above using hints of strings and other instrumentation to increase the potency of their compositions, in the opening track "Blind Enchantment", one of the better songs with a brickhouse rhythm section and some killer vocals. There are occasionally a few of the tracks where the vocals feel too tough for me, like "Single Lines" where Duarte sounds like a hybrid of Phil Anselmo and Sacred Reich during the aggressive vox. But even this track has a decent vocal hook in the chorus. I would like to point out that the band is truly at its best when thrashing out a faster number such as "The Cold" which almost takes on a Carnal Forge vibe during its thrust; or "Shell" which has its share of grooves but some of them are mighty catchy.

I'll admit I wasn't in love with the majority of the album. There was a little too much nu-ish groove for me and the deviations in which the band starts to kick ass are too few. However, I can say that the band is captured well with a superb mix, and the vocals have a nice range which might be better served in a pure thrash or power metal band. And if you're fond of stuff like Machine Head, Slipknot, recent Soilwork, and the like then I'd make a natural recommendation towards this album.