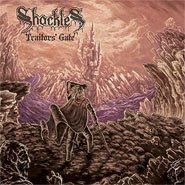 A release through Hell's Headbangers almost guarantees a particular sound: a devotion to the razor filth of carnal death, thrash and black metal which is often lost amidst the studio overdubbed wankery of modern metal. It's a breath of stale toxicity which some of us gladly inhale. Australia's Shackles embody this aesthetic with their debut Traitors' Gate, a barbaric onslaught of pure blackened thrash/speed metal peppered in sporadic leads and do it yourself attitude.

It took me a few listens before the album grew on me, the riffs aren't exactly the type of memorable fare which you'll instantly want to replay. But taken in its savage whole, the album is pretty entertaining and has a nostalgic, dark glow to it which has slowly won out. Specific highlights include the girls' chanting at the opening of "Cat O'Nine Tails", which creates a mesmerizing effect alongside the doom-laden guitar trills. Pretty damned evil. "Exhumed from a Watery Grave" is a flowing acoustic instrumental, actually a sweet break from the aggression of its environs. For the more brutal fare, "Malignant Expulsion" and "Orgy of Corpses" are good slower tracks; "Iron Crosses" and "Exorcised Remains" handle the speed.

The mix is raw yet vibrant, adequate for this style of dark early speed metal. Punk fueled riffs are captured with energy, drums sound straight from the rehearsal room, and the leads glitter on the horizon. At times I couldn't make out the bass much, but it's there. Shackles should appeal to fans of early, raw thrash metal like Possessed, Venom or earliest Kreator. I'd also liken them to Order from Chaos in that they seamlessly mesh the death, black and thrash elements into one. It's not perfect and it's not immediately catchy, but if you're a fan of the type of album Hell's Headbangers are known for pushing, then this is directly up your alley. I know it was up mine.