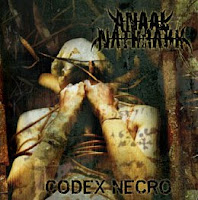 Arriving like a nuclear payload over the stagnant, turn of the century black metal scene, Anaal Nathrakh were one of the bands whose vicious ideals and unrelenting sonic massacre helped reinvigorate the clarion call to blasphemy. The Codex Necro is simply one of the most beautiful and bestial haunches of raw meat to ever animate and step off the butcher block. Infusing grind savagery, necrotic black and death metal into an unforgiving onslaught, they immediately entered the radar of many an extreme connoiseur.

One listen and you'll realize why. This is heavy. The band does not let up. While many bands were roaming the snowy landscapes and preaching pagan idolatry, Anaal Nathrakh strike at you from an urban, industrial wasteland. The album begins with a trio of jaw smashing rapid fire fistfucking mayhem ("The Supreme Necrotic Audnance", "When Humanity is Cancer" and the pummeling "Submission is for the Weak"). Few were likely to survive past this initial genocidal triumvirate, but if they had, they'd only have been met with the scathing and uncaring winds of the "Pandemonic Hyberblast". This album must have sent me to the emergency room a half dozen times and cost me $1000s in uninsured hospital bills. And yet the album grows more intense with every moment. "Paradigm-Shift Annihilation" strikes with a succession of dark industrial drumming, spoken word and brutal fucking black attack. "The Technogoat" is one of the most venomous predators to be sighted outside of the Norwegian source. How about those fucking wa-was? "Incipit Flock" indicts the massing meek of Earth to an untimely death penalty. "Human, All Too Fucking Human" heralds the nihilistic afterbirth of well read black metal legions. The title tracks ends the album even more destructively than it was announced.

I'd offer you some lyrics...but the band has graciously decided not to include them. Wankers! It is hard to remain bitter about this, because they offer so much else to be bitter about. The Codex Necro is also noteworthy because it's one of the better self-produced black metal records ever, with an aggressive and messy crunch and hiss. The vocals slather through various modes of misanthropic grunts, snarls and howls, and the band uses a myriad of film samples tastefully and often subtly among their compositions. Half the vocals sound more like someone choking on battery acid than actually verbalizing lyrics.

They've released several great albums since this one, but I always return to the Codex Necro, their finest and darkest hour, and I recommend it to you as your inaugural neckbreaking to this band. Jesus avert your ears.

The Codex Necro can be so exhausting to listen to. It's just so fucking awesome.

This album rules, and so does this review. A perfect coupling.

One of my favorite bands, absolutely merciless.

DIE ON YOUR KNEES!!!