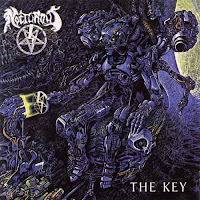 The Key was Tampa death metal outfit Nocturnus' debut full-length, bringing forth a sci-fi/occult concept, and a then-unheard-of combination of atmospheric keyboard touches in death metal. Morbid Angel in space, if you will. The band lives wonderfully up to this comparison, bringing furious technical riffs upon riffs along with some superb production.

"Neolithic" is a song ahead of its time, "Undead Journey" shows us that even wind chimes have a place in death metal. Mike Browning's relatively accessible thrash-like vocals are always fitting. Lyrics occasionally hover around the level of cheesiness, but what is to be expected with an album that has a presumably Satanic android on the front? Speaking of that cover art, it's fantastic and utterly fitting.

"Andromeda Strain" positively radiates a gritty science fiction atmosphere, synths sweeping amongst breakneck riffs. "Droid Sector" is my personal favorite. A discordant, eerie sci-fi intro, and then: ENTER THE DROIDS! From here you are spirited away into space, nightmarish and littered with hulking remains of capital ships ravaged by killer droids moving at the speed of death. Schizophrenic, mathy rhythms punctuate the song throughout.

It is a big deal to call an album perfect, but The Key is that to me. Every song is so memorable and killer, every time I spin it I am completely satisfied in a way only that this brand of death metal could satisfy me. Check it out if you haven't.

How funny is it that Metal Inquisition also just dropped this album into their last post? Good review.

haha, that is wild. Thanks for the compliment. :)