Mithras - Behind the Shadows Lie Madness (2007) 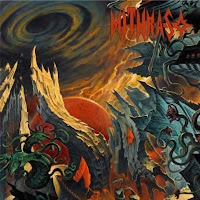 Mithras have steadily evolved into one of England's best death metal acts, and this 3rd album is their most promising to date. It picks up where Worlds Beyond the Veil left off, brutal and quickening death akin to Morbid Angel, yet tempered in progressive structures, tasteful synthesizers and a cosmic/occult/metaphysical theme which gets spacey enough to leave this influence well behind in Florida.

The synth driven instrumental "The Journey and the Forsaken" immediately casts the mood to this piece, its simple tones elevate the senses to an astral space where surreal and alien forms menace and astound (sort of like the cover of the album.) Following this is "To Fall from the Heavens", which highlights one of this band's strengths: their ability to merge prog metal guitar riffing with blast beats and create a brutal hypnosis. In addition to the expected grunting vocals, they add some beefy cleans to create a fragmenting, explosive effect. "Under the Three Spheres" is blistering and beautiful, Sam Bean's brutal throat anchoring a frenetic and calculated balance of hyper melodies and thrusting percussion. The majority of the album is astounding, but if I had to pick a few standout tracks I really enjoyed the glory of "Behind the Shadows", the choppy and expressive "Thrown Upon the Waves", and the neck stamping "Awaken Man and Stone" with its winding rhythms. There are also some additional. synth pieces like "Into the Unknown", "The Beacon Beckons" and the excellent "When the Light Fades Away" which round out the experience. The lyrics aren't perfect, but adequately capture the haunting, longing cosmic themes surrounding the songs, rooted in Lovecraft and various mythologies.

Needless to say the album sounds fantastic, the band makes excellent use of their synth tones and guitar effects to dazzle the listener amidst the pummelling of the drums and grinding rhythm guitars. The vocals are blunt and effective and it's the type of album you surely want ot sit down and listen through in its entirety. I highly recommend this title when you're reading some sci fiction or engaging in an online game like EVE Online or something where the vastness of space occupies much of your time in between interactions.

This is a killer release and Mithras are one of the most promising death metal outfits from the Empire.

Fantastic record, which I still listen to to this day. I recall when this and Kronos - The Hellenic Terror hit us on the same day, one that will live in infamy.

I love pretty much everything about this album.