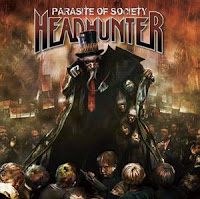 2008 has had yet another thrashing surprise in store for us with the first Headhunter album in 14 years. As if Schmier weren't busy enough with the extremely productive schedule of Destruction these past few years, he has decided to resurrect his other kickass band. Jorg Michael is back on the drums and Uwe Hoffman on guitars, and the trio deliver yet another high impact, energetic thrash/speed album with the usual tight focus on wild rock-infused songwriting (which is how their sound avoids sounding exactly Schmier's more popular band).

The album is loaded with melodic thrashers such as the title track,
"Read My Lips", and "Doomsday for the Prayer". Occasionally, the tunes have an almost power metal edge to them like the excellent "Silverskull", and the very 80s rocker "Backs to the Wall". Speaking of rockers, the band also includes covers of "18 & Life" by Skid Row and "Rapid Fire" from Judas Priest. The latter is pretty good but I'm not so sure about the "18 & Life" rendition. Pretty much the sole weak point on this album, which is otherwise a lot of fun.

I'd daresay this is even better than the most recent Destruction album. Headhunter isn't quite as heavy or consistently thrashy, but that's what I enjoy about it. It gives Schmier to breathe and perform in a more rock oriented sound, and it really works, just like their past three albums. Along with the new Paradox this is among my favorite thrashing records of the year. Go Germans.