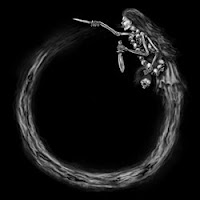 I was a pretty huge fan of this enigmatic Finnish band's sophomore outing To Live Again and Dominate, a very straight forward and glorious album, and even better than their great debut Dynamics of Creation. To an extent, Eternal Return is just par for the course. It's neither groundbreaking nor a masterpiece, yet it retains many of those same qualities which constantly draw me back into the form, even though I've heard it all a million times. Great fucking black metal, immersion through atmosphere and simplicity yet entirely desolate.

"From Beyond the Chains" is a cold and grim charge to open the warfare, followed by the excellent "Altars of Our Black Cult" with plods along at a Bathory pace before opening up the gates of damnation and spewing vitriol into the winter air. Do you feel the futility of your death as you rise the next crest into the enemy's waiting, bloodied embrace. FUCKING CHARGE. CHARGE TO YOUR DEATH. "On Wings of Steel" levels the battlefield with its altering glorious gait and ominous, rocking menace. The final two tracks are longer: the title track being almost 9 minutes of glorious mid-paced epic Finnish black metal, and "Apotheosis" clocking in over 11 minutes, even MORE epic. Five songs are all that is needed to give one a contentment, a grim fulfillment that you have been served.

And what more is there to say? If you are the type of person who loves true Scandinavian black metal with absolutely zero bullshit, zero attempts at any type of harmony or beauty (and therein lies its true beauty), then you will fucking devour this, as I have. During those cold stretches of barren New England winter, this is the type of album I will break out of the crypt to accompany me on pensive wasteland journeys. You can either join me or sit cuddly by the fire and listen to Fall Out Boy or something. In which case fuck you.

ZOMG DID HE REALLY GET ASHLEE SIMPSON PREGNANT!?!?