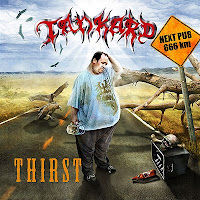 Beer stein in hand? Fat, unapologetic drunk on the album cover? Alcoholic Teutonic thrash. Ready. Set. Go. It's time for a new Tankard album again, and the band is coming off a series of some of their best work since the original trio of Zombie Attack, Chemical Invasion, and The Morning After. Though it would have been a tall order to ever match those masterworks, the band have been hitting it close with albums like Beast of Bourbon and Beauty and the Beer.

Does Thirst deliver once more? Not exactly, but it's a solid effort with well constructed songs and an emphasis on pure thrashing mood. Gerre's vocals are quite the same today as they were in the early albums, but the riffs aren't nearly as frenetic or punk fueled. The album begins with "Octane Warriors", a catchy enough track with busy riffing and breakdowns, a sort of tribute to wild stretches of open road and a craving for fucking beer! "Deposit Pirates" has a pretty steady pace, not one of the best songs here, but "Stay Thirsty" has some great riffs and it's quite fun even with the acoustics. "Hyperthermia" and "Echoes of Fear" are decent enough German thrash, but the songs almost feel too serious for this band. But then you read the lyrics and realize, nope, it's still Tankard: 2/3rds alcoholic joy and 1/3rds an almost futile attempt to write the more serious thrashing topics like war, society, etc. "When Daddy Comes to Play" seems to be about some abused child locked away in a basement for decades. "Zodiac Man" is about some anomalous cosmic superhero, or something. "G.A.L.O.W.", or "Gods and Legends of War" is one of the better songs here, a lot of fun. "Myevilfart" is, well, dumb. "Sexy Feet Under" is another of my favorite tunes on the album, a nice energetic number with some nice riffing, and it's about...a foot fetish!?

The production of the album is superb, much like the last three. Everything is clear and they've never sounded better from a studio standpoint. Unfortunately the album does lack some of that reckless and wild feeling that so saturated their younger days in hops and barley. However, it's still Tankard, it will still be waiting at the pub with another round, on the house, to give you a swift thrashing kick to your ass. And isn't that enough?