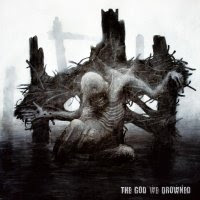 Hovering somewhere between the simpler Swedish melodic death of Amon Amarth and the more extreme death of countrymen Exmortem or Panzerchrist, is the debut from this Danish outfit. The God We Drowned is a solid slab with 11 tracks, each a pummeling statement of the band's intent to deliver grooves and breakdowns amidst decent riffing.

"Behind the Veil" begins with thundering drum fills over a simple, desolate guitar riff, it has an old school vibe which reminded me quite a lot of Bolt Thrower until the faster riffs picked up. "Apotheosis" has a lot more groove to it including a fairly weak breakdown. Things improve again with "Winter is Coming", a slow yet driving number with some catchy riffing. "The God We Drowned" and "Death Knell" are faster again and decent examples of Crocell's beefy, battering and simple style with an occasional foray into melodeath riffing. "The Chosen" could have very well appeared on the latest Amon Amarth album. "The Culling" thrashes it up with a very groovy melodeath gait akin to In Flames. "The New Blood" is the most bludgeoning bit of death metal on the album, one of the best songs with some nice choppy riffing.

This isn't an extremely original album but a good enough debut to those open minded death metal fans who don't mind a middle ground before the more accessible and the more brutal. The guitars sound good, its heaviness is never in question, and it's never quite boring. 2-3 of the tunes were weaker and ultimately forgettable but the rest of the album is worth hearing.