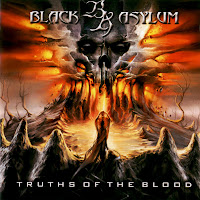 Here's a new Australian band that have put together and self-released their own debut, a mixture of thrash and groove with some hints of melodic death. The vocals remind me a lot of Phil Anselmo with that tough guy 'hwah' charisma. In fact you can hear quite a bit of Pantera here, the band openly touts them as an influence, and when he does the talking style it also sounds like Phil. There are a few clean 'emotional' vocals too which just flat out suck.

Thus the band's foundation is thrash metal but with a little more groove than you'd expect, and the melodic parts often remind me of something like Opeth, though these are generally brief parts of the song. Everything I've written so far has likely turned off 90% of the people who read this blog, but surprisingly, if you can ignore the often annoying vocals, they do a decent enough job on the musical side. There are riffs in there that would sound pretty sweet under another singer.

Unfortunately, that's not the case. The vocals will be there to greet you at every turn, and you're mind will become aflutter with images of Ozzfest crack skanks shooting up and the metal rift of the early to mid 90s (if you never knew where to look). Fire the singer, or at least have him change it up so he's doing a better voice, and this would be a decent new Australian thrash band. Just not yet.